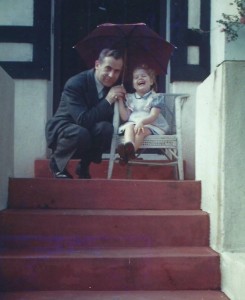 My family’s history includes lives lived on two continents, two worlds, and in two very different cultures. In today’s climate of air travel, computer technology, email/texting/Twitter and the cultural exchange brought about by globalization and instant news flashes, this is nothing unusual. But in the year 1927 when my father first arrived on American shores it was!

My father, Eugen Banzhaf, came to the United States from Germany as a sales representative of a company known at the time as StahlUnion, now known as the ThyssenKrupp Corporation with 150,000 employees in over 80 countries. When he was sent by his company in 1927 to New York City however, he was the single US representative. A Ph.D in political science and a degree in civil engineering made him an ideal candidate for matching products with projects. His job included what was seen at the time as frequent travel to and from the factory in Germany – approximately every two years.

My mother, Emmy Elfriede Ahrend, and my father had known each other previously in Germany for 8 years. After my father left for the United States, my mother spent 2 years as a nanny in London to learn the English language. In 1929 he sent for her to come to America to be his bride and on the day of her arrival in New York City they were married. America at the time was the land of golden opportunity and as a young couple their future together in their new home looked bright indeed. As a company representative he was sent to various locations within the US, from Austin, to Seattle, to San Francisco and finally to Los Angeles. For my parents this was an exciting adventure and a great opportunity see the vast expanse of our country. They finally settled in Los Angeles, where eventually my father set up his own company as an independent sales agent for StahlUnion. In 1937 I was born, a US citizen, in the City of the Angels. My parents had both applied for naturalization as United States citizens and were waiting for the final papers.

As a small child I was unaware of the geo-political climate at the time or the history behind it, but as the shadow of war began to creep over the Atlantic Ocean and on to the West Coast I came to know that there were Bad Guys and Good Guys in the world. The country was starting to mobilize, posters abounded with caricatures of the Bad Guys, both Asian and Caucasian, and the children in school knew the jump-roping rhyme ‘Hitler in the Trash Can and Roosevelt on top’. It was then that I learned that Hitler was a German. I knew German was spoken in my home. My parent’s accents were a constant reminder of their ethnic origin – and now shame. Germans were always referred to as ‘Nazi-German’, one word was never used without the other.

On the night of December 7, 1941, my father was apprehended from his home by the FBI and taken away without an explanation or a destination, leaving my mother and me with no means of support as all bank accounts and assets had been frozen. After his arrest, my father was taken to the Terminal Island Correctional Facility, a section of which had been converted to house individuals of foreign extraction who had been targeted for investigation. After a brief review, retention was recommended, and he was transported to various detention camps within the United States: Tuna Canyon Detention Center in the Sunland-Tujunga area of Los Angeles, Stringtown, Oklahoma, and back. These individuals were labeled ‘enemy aliens’ and their detention was preconceived through the Alien Enemies Act of 1798 still in effect, the historical precedent for WWII government action. In addition their rights of ‘habeas corpus’ were removed leaving them with no protection from illegal imprisonment or the right to a trail.

For the interned the experience was minimally humiliating but often terrifying. In camp each prisoner was given an identification number in the same manner as those convicted of a crime. ‘Enemy aliens’ awaited the date that would be allocated for their number to come before a panel for review. Each individual case would be investigated by a tribunal and a decision would be made as to the fate of the prisoner be it further detention in camps throughout the United States, repatriation, parole, or release. In some cases detainees were sent to high security facilities. For my father it would be almost 3 years before his case was resolved. After a brief hearing, he was declared innocent and released on parole, a simple procedure for the tribunal but something other than that for my father as a former prisoner/internee entering the mainstream. He reentered completely without financial means and the ability to support his family which proved to be devastating for this proud man. The sum total of his assets, including his business, had been completely confiscated by the government during his incarceration. Additionally, anti-German sentiment was understandably strong among the general population, as they too had suffered loss as the consequences of the long and terrible war.

The years during which my father was absent were difficult ones for my mother and me. Without money, life wasn’t easy and food was scarce. It was almost impossible for my mother to find a job, as no one was interested in hiring a German, viewed at the time as a potential saboteur. Patriotic spirit abounded, and spitting on a German was considered acceptable, in fact, a patriotic gesture. The psychological ramifications of my mother’s experiences during the war years were extensive and included occasional hospitalizations. I was frequently left in the care of friends and occasionally, strangers.

My parents Emmy and Eugen’s lives included two world wars, the severe inflation in Europe during the period between the wars, the depression in the United States, and the isolation that came with interment as ‘enemy aliens’ during the Second World War. This is their story and as their only child I hold their lives in the highest esteem for their courage, loyalty, and strength. It also serves as a reminder of that time in history when so many innocents were deprived of the ‘inalienable rights’ granted by the Constitution of the United States of America. A cautionary tale for us all!

Sigrid Toye, the only child of a former Tuna Canyon Detention Station detainee, is an edicational-behavior therapist in private practice with a Ph.D in clinical psychology.

Now Is the time to build the long awaited memorial to remember the 2000 men and some women whose lives were unjustly interrupted.

Our intention is to make the memorial a reality, but we need your help.

Your gift will be tax deductible since we are a nonprofit organization.